There is an Apple laptop called the macbook1,1 from 2006 which uses the same i945 chipset as the ThinkPad X60/T60. A developer (Mono Moosbart) ported the Macbook2,1 to coreboot, working alongside Vladimir Serbinenko. The ROM images also work on the macbook1,1. Libreboot’s support and documentation for this is based on the Libreboot project, which also supports macbook2,1

Macbook2,1 laptops come with Core 2 Duo processors which support 64-bit operating systems (and 32-bit). The MacBook1,1 uses Core Duo processors (supports 32-bit OS but not 64-bit), and it is believed that this is the only difference.

The following pages list many models of MacBook1,1 and MacBook2,1:

Macbook2,1 can always be flashed internally, even if running Apple firmware:

Macbook1,1 same as above, but if running Apple firmware see below for external flashing.

macbook1,1 requires external flashing, if running the default Apple firmware. macbook2,1 can be flased internally, regardless. If running coreboot, libreboot or Libreboot, you can already internally re-flash.

Locate the flash. It’ll be a SOIC8, which looks like this: 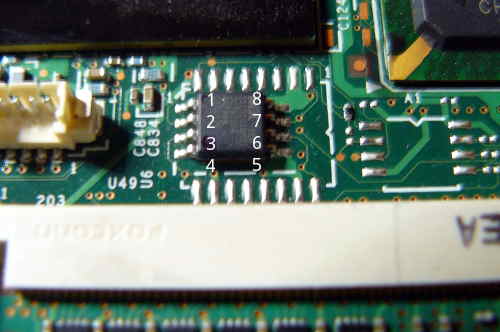 Refer to the following guide:
Externally rewrite 25xx NOR flash via SPI protocol

You need to replace OS X with GNU+Linux before flashing Libreboot. (OSX won’t run at all in Libreboot), if you wish to internally flash on a macbook21. Libreboot won’t boot OSX either (well, maybe with Tianocore it would, but that’s untested and OSX is inferior to GNU+Linux). In general you should think of your Macbook like a regular laptop, for the purposes of anything coreboot.

If it’s a macbook2,1 with the core2duo processors, you can run a 64-bit distro. For macbook 1,1 the CPU probably only has 32-bit support.

How to boot an ISO: burn it to a CD (like you would normally) and hold down the Alt/Control key while booting. The bootloader will detect the GNU+Linux CD as ‘Windows’ (because Apple doesn’t think GNU+Linux exists). Install it like you normally would. When you boot up again, hold Alt/Control once more. The installation (on the HDD) will once again be seen as ‘Windows’. (it’s not actually Windows, but Apple likes to think that Apple and Microsoft are all that exist.)

The following page has some information:

There is one mouse button only, however multiple finger tapping works. Battery life is poor compared to X60/T60. The Apple logo on the back is a hole, exposing the backlight, which means that it glows. You should cover it up. The MacBook2,1 consumes more power with libreboot than with the Apple EFI firmware, which means it overheats a lot.

The MacBook2,1 comes with a webcam which does not work with free software. Webcams are a privacy and security risk; cover it up! Or remove it.

This section is less relevant for Libreboot 20211122 and newer, because cstate level 3 support was added, thanks to vitali64 on IRC. This means that the CPU temperature is much lower most of the time, as is power consumption. However, you might still benefit from the steps below, just not as much as you would have previously benefited.

The MacBook2,1 overheats a lot with libreboot, we still don’t know why but a simple workaround is to install macfanctld.

Macfanctld is available on the default repos of many distributions.

For example, to install macfanctld on an Arch-based distro (Parabola, …), you would run as root

and don’t forget to enable it by using systemctl or by a script that will run macfanctld if using runit.

Then, you want to install powertop and tlp. And then, run the following on battery

Then, after quitting powertop, run :

Now, configure tlp, edit the /etc/tlp.conf and uncomment/add/modify the following:

The keyboard has a keypad enter instead of an AltGr. The first key on the right side of the spacebar is the Apple “command” key. On its right is the keypad enter. We can make it act as an AltGr.

If your operating system is Trisquel or other dpkg-based distribution, there is an easy solution. Under root (or sudo) run

and select the option “apple laptop”, leave other settings as their defaults until you are given the option “Use Keypad Enter as AltGr”. Select this. The keypad enter key will then act as an AltGr everywhere.

For Parabola or other systemd-based distributions you can enable AltGr manually. Simply add the line

to the file /etc/vconsole.conf and then restart the computer.

A user submitted a utility to enable 3-finger tap on this laptop. It’s available at resources/utils/macbook21-three-finger-tap in the Libreboot git repository.

Linux kernels of version 3.15 or lower might make the touchpad extremely sluggish. A user reported that they could get better response from the touchpad with the following in their xorg.conf:

Markdown file for this page: https://libreboot.org/docs/hardware/macbook21.md

This HTML page was generated by untitled static site generator.